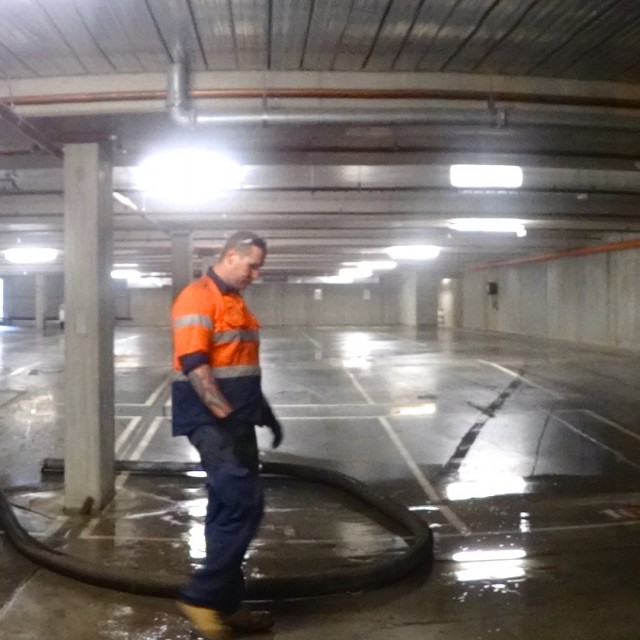 Use of vacuum unit and drain cleaning unit

Following torrential rain, the basement carpark of a public sector building was flooded and laden with silt and debris from the surrounding area. The lift well was completely flooded and out of use.

DrainTech Solutions attended the site to assess conditions and conduct immediate de-watering of the basement. Roofing contractors were brought in to clean the roof and gutter of debris.

Preliminary investigation revealed that significant amounts of water had been entering via. the carpark entry ramp. There was a visible tidemark running from the adjacent street, indicating the location of the water entry. These observations were reinforced when staff reported that during recent storms a torrent of water was seen spilling across the garden, collecting garden debris and entering the carpark. The submersible pumps located inside the carpark were choked with debris and sediment and subsequently unable to cope with the inundation. This had resulted in flooding during the heavy rain.

DrainTech Solutions Plumbers continued de-watering and commenced clean-up of the remaining larger debris and removed the submersible pumps for servicing. Solid debris and sediment were removed from the stormwater pits and pipes within the basement by a large vacuum unit and large drain cleaning unit.  The lift well was dewatered and re-commissioned. Finally, a sweeper/scrubber was used to clean the fine silt from the carpark surface and the submersible pump set was reinstalled, bringing the system online.

DrainTech Solutions provided a number of recommendations for the site due to the likelihood of reoccurrence as a result of the topography of the site. It was recommended a physical barrier erected at the boundary of the site to prevent the inflow of water from the adjacent street during heavy rain. A council inspection was also recommended to investigate the origin of the excess stormwater on the adjacent, and the installation of a stormwater system compatible with the topography of the area and surrounding industry.

The carpark, stormwater system; including submersible pumps and lift were completely remediated within five days of flooding.